EpubCheck is an invaluable tool for assessing the quality of EPUB files. Still, it is possible that EPUBs that are valid according to the format specification (and thus EpubCheck) are nevertheless inaccessible to some users. Some weeks ago a colleague sent me an EPUB 2 file that produced some really strange behaviour across a number of viewer applications. For a start, the text wouldn’t reflow properly after re-sizing the viewer window, and increasing the font size resulted in garbled text. Running the file through EpubCheck did return some validation errors, but none of these were related to the behaviour I was getting. Closer inspection revealed some very peculiar stylesheet and HTML use.

As I cannot share the original file for rights reasons, I fired up the Sigil e-book editor and made a handcrafted EPUB that reproduces its behaviour. You can download the file here. If you open it in an e-book viewer, it will probably look perfectly normal at first sight. For example, here’s a screenshot I made using the Calibre viewer: 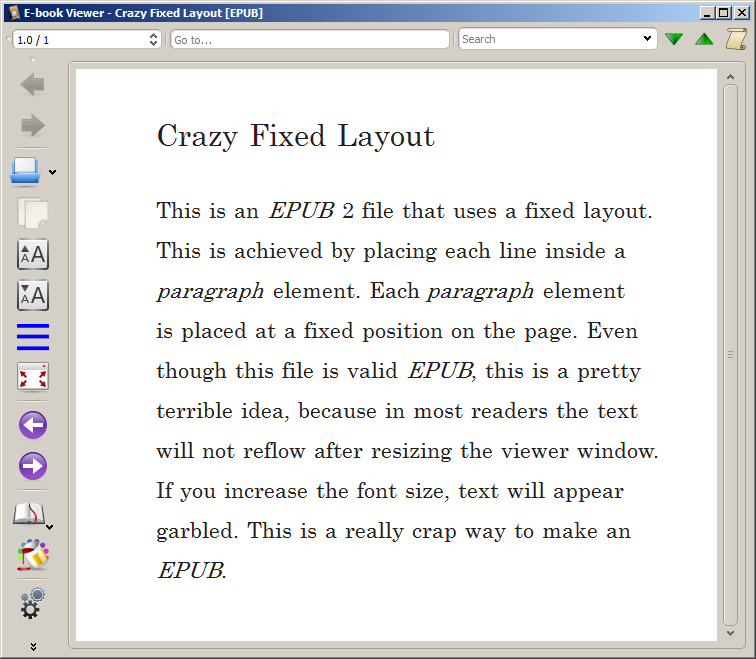 Next I reduced the width of the viewer window. One would expect the text to re-flow to the new width. Instead this happened: 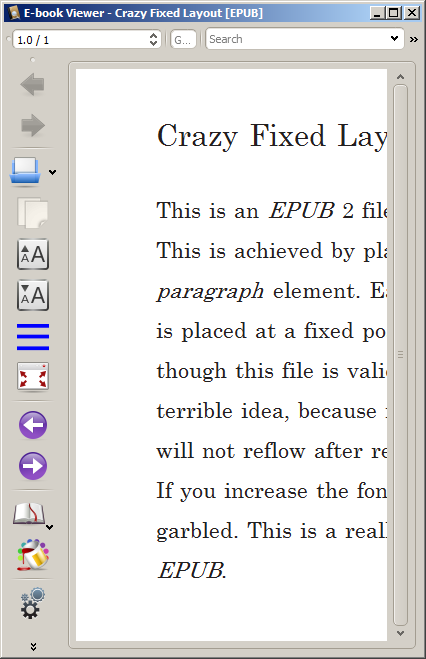 After increasing the font size, I ended up with this: 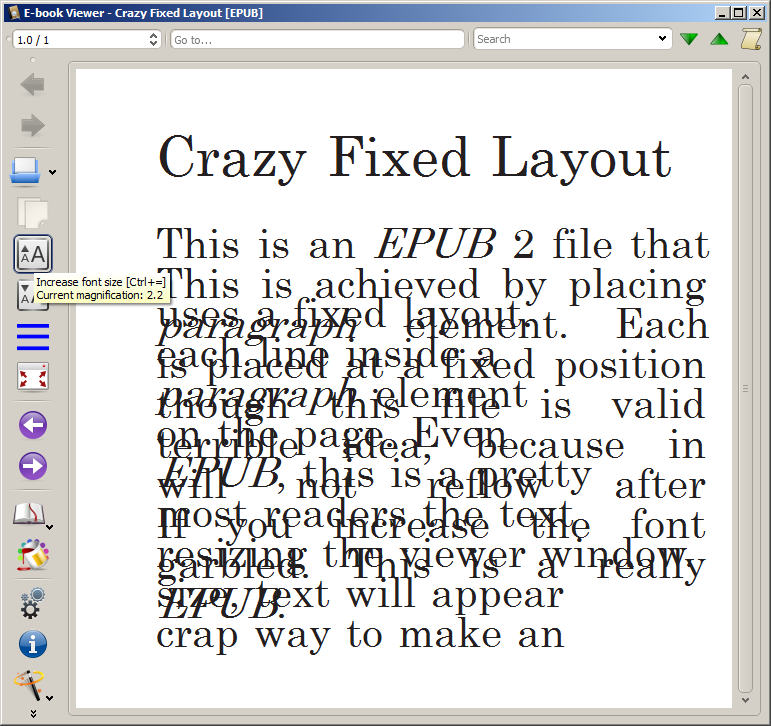 I got similar results in Chome’s Readium extension. On my e-Ink reader, a Sony PRS-T2, the book rendered as follows:

However, I wasn’t able to change the font size.

The file passes validation in EpubCheck 4.0.1 without errors. However, the output does contain a series of warnings about the use of absolute positions in a stylesheet:

To really understand what causes the problem, we need to look inside the file’s HTML and CSS resources. Here’s some of the HTML that underlies the text:

So, every line is wrapped inside a paragraph element, each of which has a unique id selector. These refer to style definitions in the EPUB’s stylesheet. Here are the definitions for the first two lines:

Each style definition specifies a line’s position on the canvas (left, top); moreover, these co-ordinates are defined as absolute positions. This means that each line is placed at a fixed position, regardless of whether this makes any sense given the actual dimensions of the viewer window (or device), or the user’s preferred font size. It seems that the intention of the producer of the original EPUB (from which I derived my example) was to create some sort of “fixed layout” document. However, this doesn’t make much sense for books with simple, text-only layouts (as in this case). Worse, depending on the viewing device and the user the file may be effectively inaccessible. For example, someone with a visual impairment may only be able to read an EPUB using very large font sizes, which in this case results in garbled text.

Things can even get worse. I once came across an EPUB that used similar tricks to achieve a two-column layout. Again I’m not able to share the original file, so I created another EPUB that mimicks its behavour. In the Calibre viewer it looks like this: 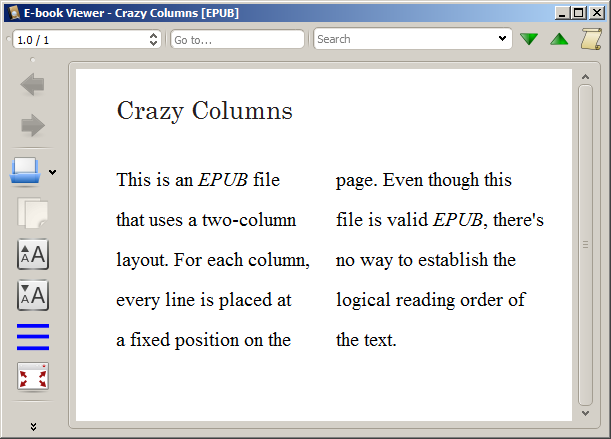 As with the first example, the text doesn’t reflow after resizing the viewer window, and increasing the font resulted in this: 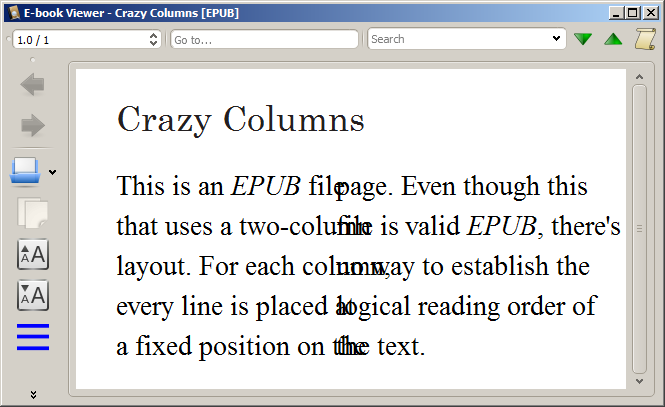 This is what I got when I opened the file in my Sony e-Ink reader: 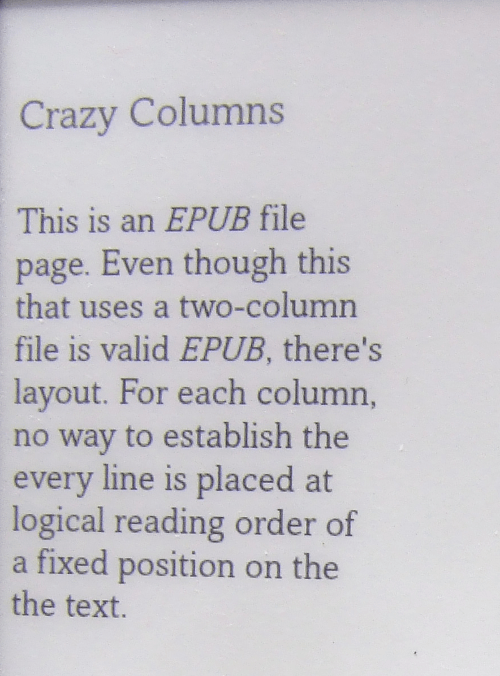 After I increased the font size this happened: 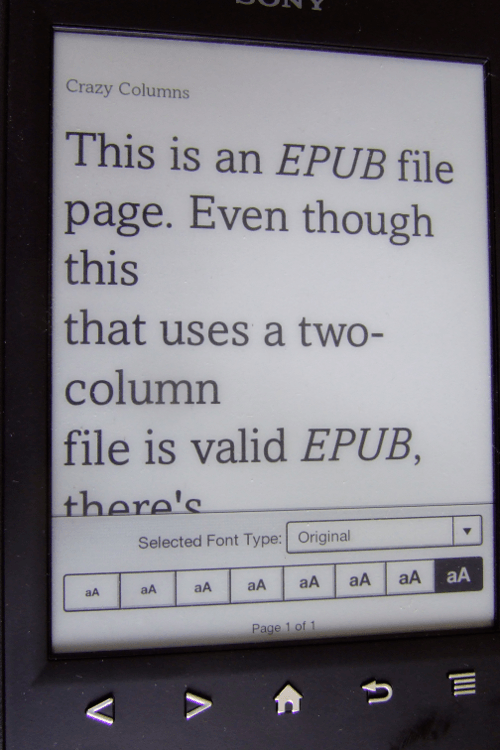 Similarly, when I tried to copy the text in the file to the clipboard, and then pasted it in a text editor, I ended up with this:

Again, throwing this file at EpubCheck 4 doesn’t result in any validation errors, although just like the previous file there are some warnings about the use of absolute positions in the stylesheet:

A peek inside the HTML reveals the true horrors of this EPUB. This is how the text is encoded:

So, every line of each column is wrapped in a division element that has a fixed position. The class pos in the stylesheet defines the general layout of each division element. In this case, it specifies that all positions are (again) absolute:

Technically this is pretty similar to the first example. Note that the above HTML doesn’t contain any semantic information on the fact that there are two separate columns. Worse, the order of the text in the HTML doesn’t even follow the actual reading order! This also explains the results after copying and pasting. Screen reader applications will not be able to handle this either, which makes books like these inaccessible to many visually impaired users. All of this could have been avoided if the book’s producer had followed the W3C multi-column layout specification.

I don’t know how common (or rare) EPUBs like the above are. They may just be weird edge cases. Nevertheless, their existence indicates that checking for validity alone may not be sufficient to ensure accessibility for all users (in particular those with a visual impairment). In any case, files like these can be identified relatively easily by checking EpubCheck’s output for the presence of a CSS-017 warning (“CSS selector specifies absolute position”)1. These examples also underline the importance of guidelines and best practices. Several good resources for making accessible EPUB are available from the EPUB 3 Accessibility Guidelines, including a useful Accessibility QA Checklist. I would also be interested in hearing other people’s experiences with “weird” EPUBs like these.

Alberto Pettarin pointed me to his blog post (Current) Fixed Layout eBooks Considered Harmful. Written in 2015, it addresses the problems with current implementations of fixed layouts in EPUB, and if you found this blog post interesting, I would suggest to check out Alberto’s blog as well.

Alberto’s Twitter feed also drew my attention to an interesting EPUB with the program of the recent EPUB Summit in Bordeaux. You can download it here (you need to unzip it first!). The file is interesting because:

There’s some irony in that this file was published by EDRLab, an organisation that describes itself as “the European headquarter for IDPF and Readium Foundation”, and which mentions “support for people who have print disabilities” as a “key part”of its mission. Oh well …

The EPUBs used for this blog post are part of the EPUB KB policy testing repository. This is an annotated set of openly licensed EPUB files that were specifically created for testing purposes.