Does Microsoft OneDrive export large ZIP files that are corrupt?

We recently started using Microsoft OneDrive at work. The other day a colleague used OneDrive to share a folder with a large number of ISO images with me. Since I wanted to work with these files on my Linux machine at home, and no official OneDrive client for Linux exists a this point, I used OneDrive’s web client to download the contents of the folder. Doing so resulted in a 6 GB ZIP archive. When I tried to extract this ZIP file with my operating system’s (Linux Mint 19.3 MATE) archive manager, this resulted in an error dialog, saying that “An error occurred while loading the archive”: 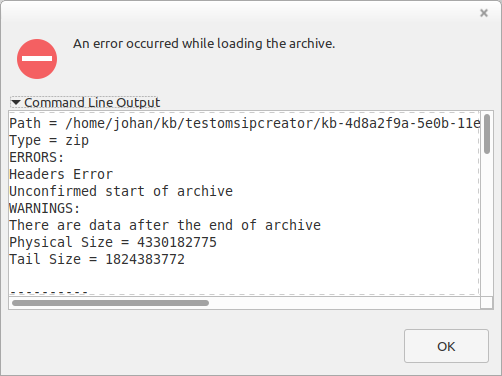 The output from the underlying extraction tool (7-zip) reported a “Headers Error”, with an “Unconfirmed start of archive”. It also reported a warning that “There are data after the end of archive”. No actual data were extracted whatsoever. This all looked a bit worrying, so I decided to have a more in-depth look at this problem.

As a first test I tried to extract the file from the terminal using unzip (v. 6.0) using the following command:

This resulted in the following output:

So, according to unzip the file is simply corrupt. Unzip wasn’t able to extract any actual data.

This resulted in the following (lengthy) output:

Here we see the familiar “Headers Error” and “Unconfirmed start of archive” errors, as well as a warning about a cyclic redundancy check that failed on an extracted file. Unlike unzip, 7-zip does succeed in extracting some of the data, but seeing that the size of the extracted folder is only 4.3 GB, the extraction is incomplete (the size of the ZIP file is 6 GB!).

At this point I started wondering if these issues could be related to the size of this particular ZIP file, especially since I have been able to process zipped OneDrive folders before without any problems. The Wikipedia entry on ZIP states that originally the format had a 4 GiB limit on the total size of the archive (as well as both the uncompressed and compressed size of a file). To overcome these limitations, a “ZIP64” extension was added to the format in version 4.5 of the ZIP specification (which was published in 2001). To be sure, I verified that both unzip and 7-zip on my machine support ZIP641.

I did some additional tests to verify if my problem could be a ZIP64-related issue. First I downloaded a smaller (<4 GB) folder from OneDrive, and tried to extract the resulting ZIP file with unzip and 7-zip. Both were able to extract the file without any issues. Next I created two 8 GB ZIP files from data on my local machine with both the zip and 7-zip tools. I then tried to extract both files with both unzip and 7-zip (i.e. I extracted each file with both tools). Again, both extracted these files without any problems. Since these tests demonstrate that both unzip and 7-zip are able to handle both large ZIP files (which by definition use ZIP64) as well as smaller OneDrive ZIP files, this suggests that something odd is going on with OneDrive’s implementation of ZIP64.

The zip tool has a switch that can be used to test the integrity of a ZIP file. I ran it on the problematic file like this:

So, apparently the zip utility thinks this is a multi-volume archive (which it isn’t). Running this command on any of my other test files (the small OneDrive file, and the large files created by zip and 7-zip) didn’t result in any errors.

The Python programming language by default includes a zipfile module, which has tools for reading and writing ZIP files. So, I wrote the following script, which opens the ZIP file in read mode, and then reads its contents (I used Python 3.6.9 for this):

This looks somewhat related to the outcome of zip’s integrity test, which reported a multi-volume archive. Looking at the source code of the zipfile module shows that this particular error is raised if a check on 2 data fields from the “zip64 end of central dir locator” fails:

Here’s the description of this data structure in the format specification: 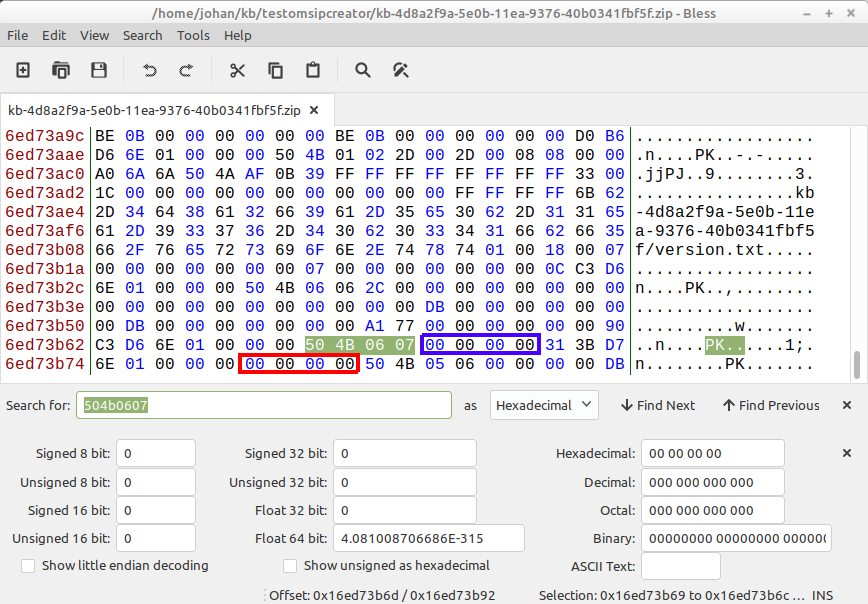 Here, the highlighted bytes (0x504b0607) make up the signature of the “zip64 end of central dir locator”2. The 4 bytes inside the blue rectangle contain the “number of the disk” value. Here, its value is 0, which is the correct and expected value. The 4 bytes inside the red rectangle contain the “total number of disks” value, which is also 0. But this is really odd, since neither value should trigger the “zipfiles that span multiple disks are not supported” error! Also, a check on the 8 GB ZIP files that I had created myself with zip and 7-zip showed both to have a value of 1 for this field. So what’s going on here?

The most likely explanation I could think of, was some difference between my local version of the Python zipfile module and the latest published version on Github. Using Github’s blame view, I inspected the revision history of the part of the check that raises the error. This revealed a recent change to zipfile: prior to a patch that was submitted in May 2019, the offending check was done slightly differently:

Note that in the old situation the test would fail if disks was any value other than 1, whereas in the new situation it only fails if disks is greater than 1. Given that for our OneDrive file the value is 0, this explains why the old version results in the error. The Git commit of the patch also includes the following note:

Added support for ZIP files with disks set to 0. Such files are commonly created by builtin tools on Windows when use ZIP64 extension.

So could this be the vital clue we need to solve this little file format mystery? Re-running my Python test script with the latest version of the zipfile module did not result in any reported errors, so this looked hopeful for a start. But is the 0 value of “total number of disks” also the thing that makes unzip and 7-zip choke?

Hacking into the OneDrive ZIP file

To put this to the test, I first made a copy of the OneDrive ZIP file. I opened this file in a Hex editor, and did a search on the hexadecimal string 0x504b0607, which is the signature that indicates the start of the “zip64 end of central dir locator”3. I then changed the first byte of the “total number of disks” value (this is the 13th byte after the signature, indicated by the red rectangle in the screenshot) from 0x00 to 0x01: 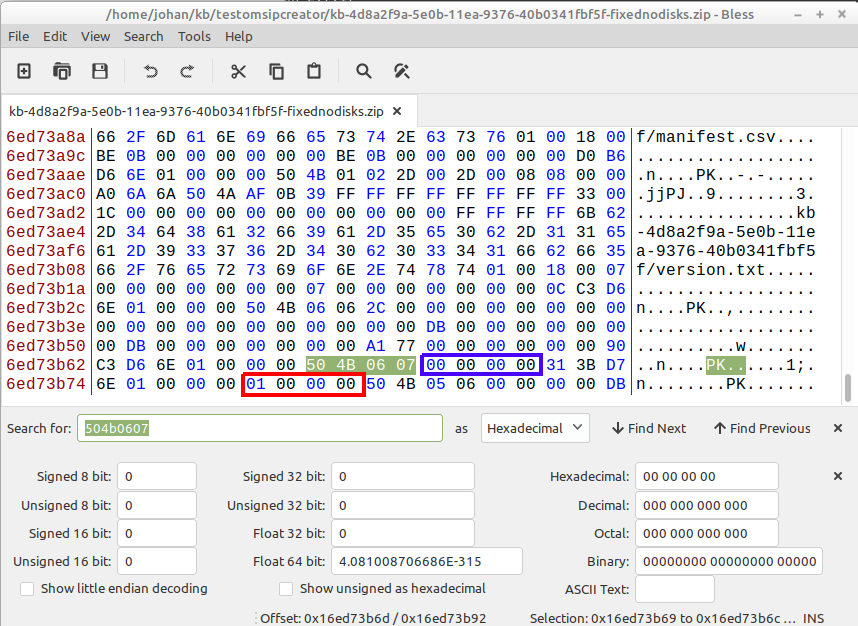 This effectively sets the “total number of disks” value to 1 (unsigned little-endian 32-bit value). After saving the file, I repeated all my previous tests with unzip, 7-zip, as well as zip’s integrity check. The modified ZIP file passed all these tests without any problems! The contents of the file could be extracted normally, and the extraction is also complete. The file can also be opened normally in Linux Mint’s archive manager, as this screenshot shows:

So, it turns out that the cause of the problem is the value of one field in the “zip64 end of central dir locator”, which can be provisionally fixed by nothing more than changing one single bit!

Other reports on this problem

If a widely-used platform by a major vendor such as Microsoft produces ZIP archives with major interoperability issues, I would expect others to have run into this before. This question on Ask Ubuntu appears to describe the same problem, and here’s another report on corrupted large ZIP files on a OneDrive-related forum. On Twitter Tyler Thorsted confirmed my results for a 5 GB ZIP file downloaded from OneDrive, adding that the Mac OS X archive utility didn’t like the file either. Still, I’m surprised I couldn’t find much else on this issue.

The problem looks superficially similar to an older issue with Apple’s Archive utility, which would write corrupt ZIP archives for cases where the ZIP64 extension is needed. From the WikiPedia entry on ZIP:

Mac OS Sierra’s Archive Utility notably does not support ZIP64, and can create corrupt archives when ZIP64 would be required.

More details about this are available here, here and here. Interestingly a Twitter thread by Kieran O’Leary put me on track of this issue (which I hadn’t heard of before). It’s not clear to me if the OneDrive problem is identical or even related, but because of the similarities I thought it was at least worth a mention here.

The tests presented here demonstrate how large ZIP files exported from the Microsoft OneDrive web client cannot be read by widely-used tools such as unzip and 7-zip. The problem only occurs for large (> 4 GiB) files that use the ZIP64 extension. The cause of this interoperability problem is the value of the “total number of disks” field in the “zip64 end of central dir locator”. In the OneDrive files, this value is set to 0 (zero), whereas most reader tools expect a value of 1. It is debatable whether the OneDrive files violate the ZIP format specification, since the spec doesn’t say anything about the permitted values of this field. Affected files can be provisionally “fixed” by changing the first byte of the “total number of disks” field in a hex editor. However, to ensure that existing files that are affected by this issue remain accessible in the long term, we need a more structural and sustainable solution. It is probably fairly trivial to modify existing ZIP reader tools and libraries such as unzip and 7-zip to deal with these files. I’ll try to get in touch with the developers of some of these tools about this issue. Ideally things should also be fixed on Microsoft’s end. If any readers have contacts there, please bring this post to their attention!

I’ve created an openly-licensed test file that demonstrates the problem. It is available here:

For unzip I found this ticket on the Info-Zip issue tracker, which looks identical to the problem discussed in this post. The ticket was already created in 2013, but its current status is not entirely clear.

For 7-zip, things are slightly complicated by the fact that for Unix a separate p7zip port exists, which currently is 3 major releases behind the main 7-zip project. In any case, I’ve just opened this feature request in the p7zip issue tracker.

Meanwhile Andy Jackson has been trying to get this issue to the attention of Microsoft, so let’s see what happens from here.

In the comments section, Paul Marquess posted a link to a small Perl script he wrote that automatically updates the “total number of disks” field of a problematic OneDrive ZIP file. The script is available here:

I ran a quick test with my openly-licensed test file, using the following command:

After running the script, the file was indeed perfectly readable. Thanks Paul!